An installation drawn from Maurice Harron’s iconic public sculpture Hands across the Divide, symbolising the division between Catholic and Protestant in the doubly named City of Derry~Londonderry in Northern Ireland.

The Shake reflects on the hands of the monument’s two figures; frozen in an unfinished reconciliation, almost meeting, but never truly joining. There exists between them an eternal gap. The four-part installation creates a literal bridge between the two hands, two communities, histories and ideologies. 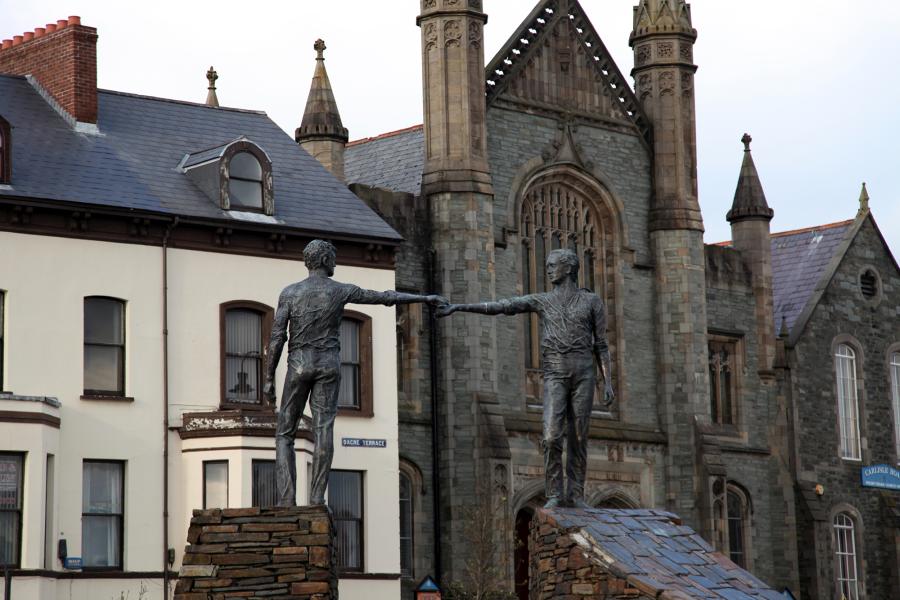 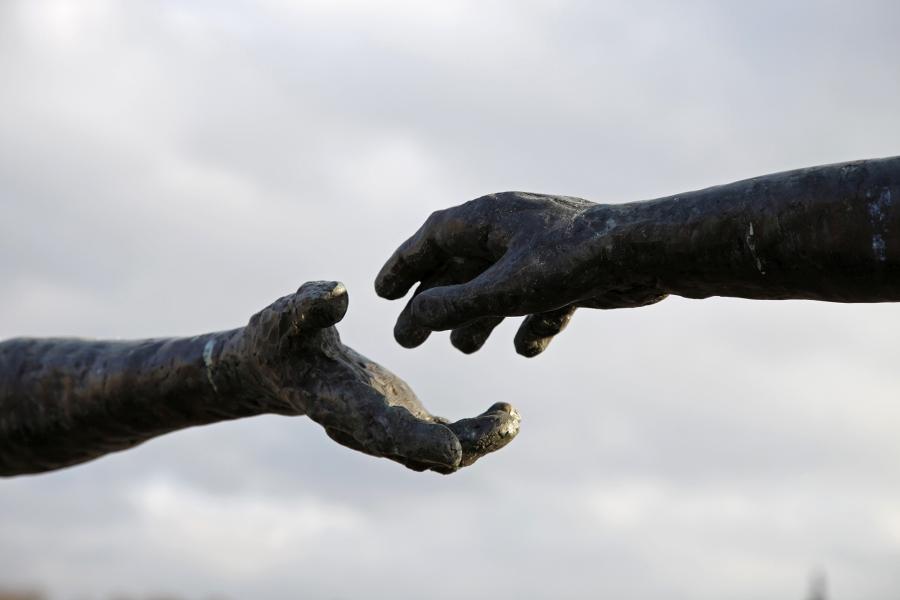 'Hands Across the Divide' sculpture by Maurice Harron in Carigavon Bridge crossing the River Foyle, Derry~Londonderry, 2013.

Did I Miss You Again? 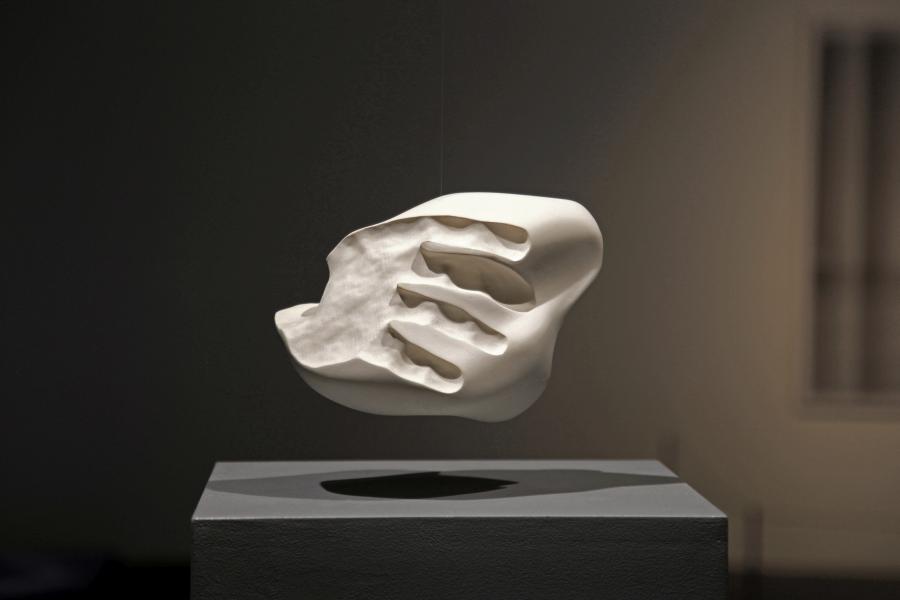 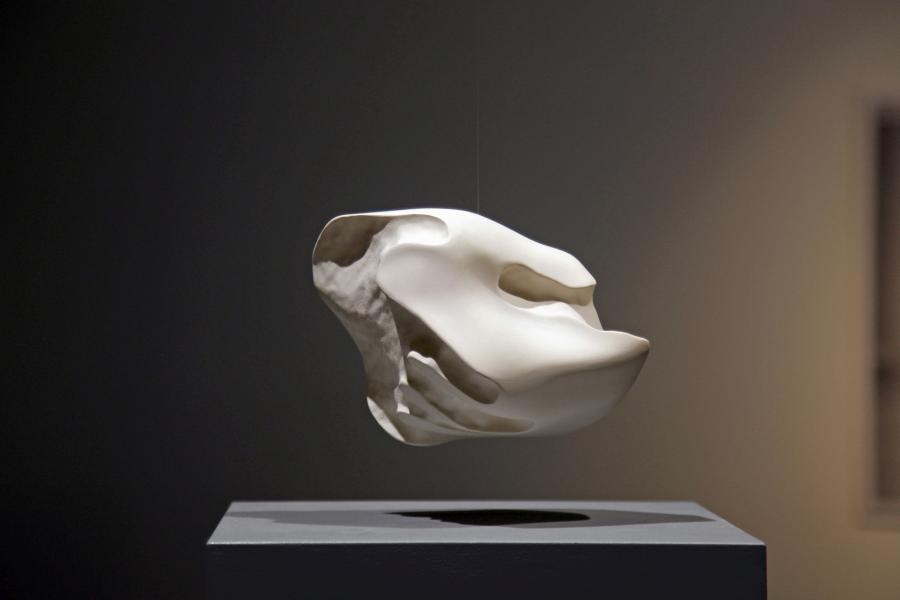 The space between the figures’ hands was captured with a high-precision 3D laser camera, translated into a 3D print, and then cast into a ceramic form. What once was an unresolvable, negative space is transformed into a palpable mass. 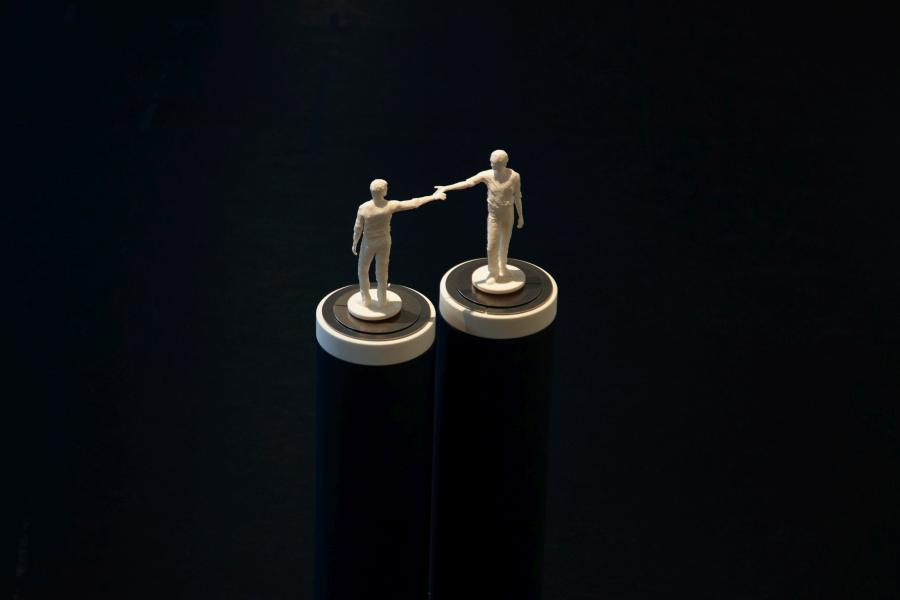 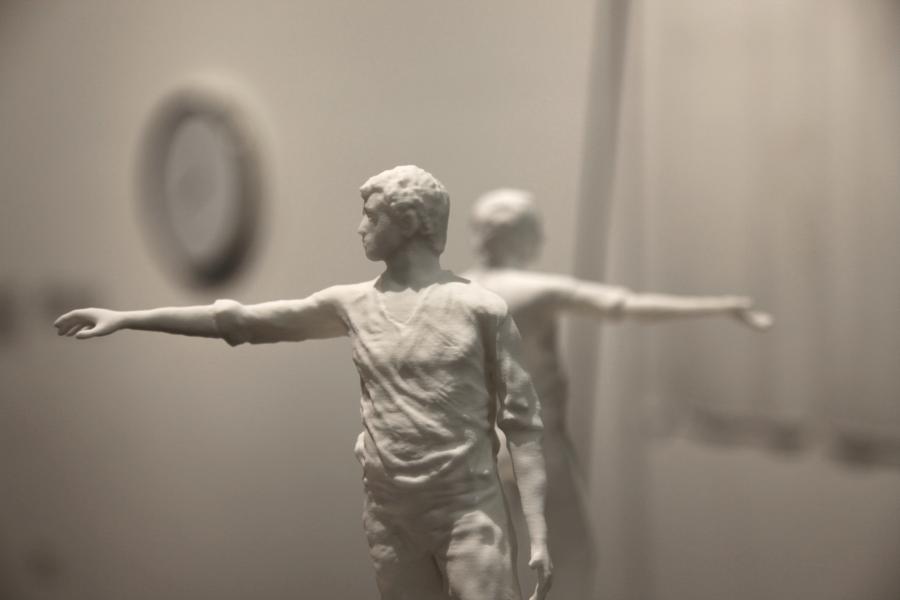 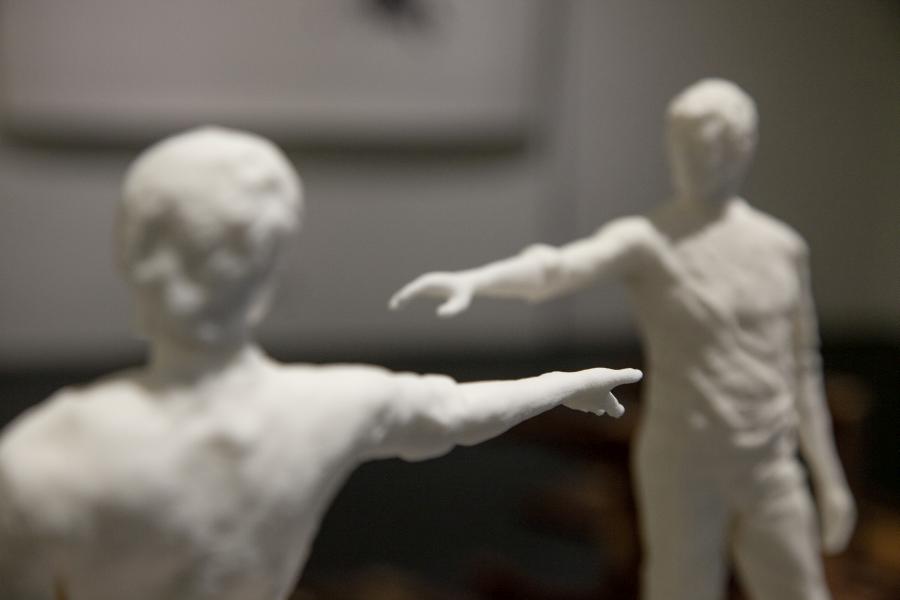 Did I miss you again?

The most recent piece within The Shake series sees miniature replicas of Maurice Harron’s two figures, also 3D scanned in high detail, placed at the center of two clocks. Each clock is set to a time zone which corresponds to significant coordinates and moments in ongoing political conflicts. The pairs of counterposed figures rotate with the passing seconds, their outstretched hands recreating Harron’s moment of unresolved reconciliation; continuously converging and inevitably missing. 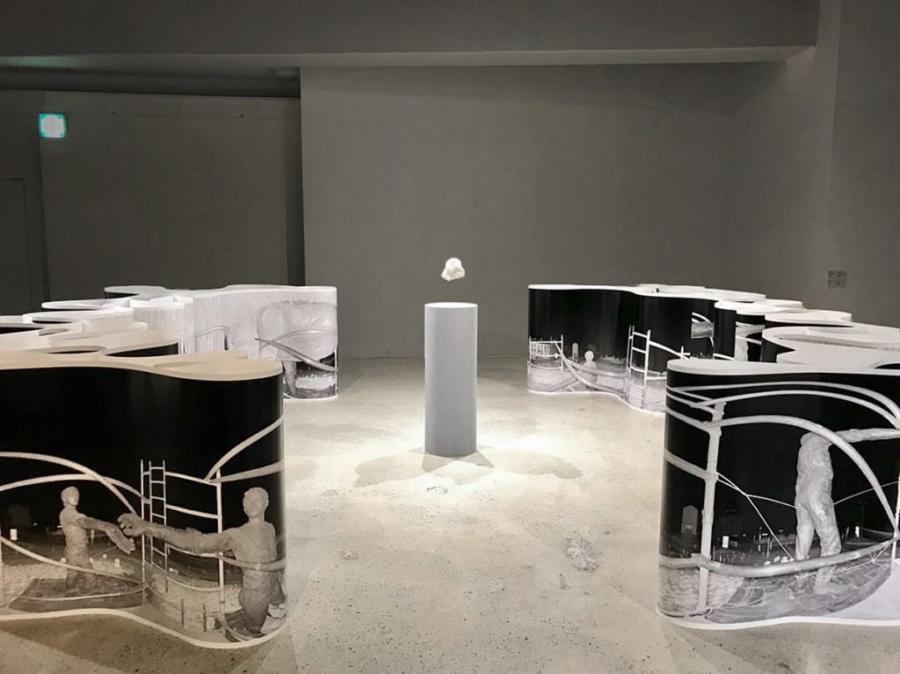 Composed of 11 by-products of the 360 scanning process, these photos include peripheral data capturing the city, the street and the strand. The stuttered movements of passersby, fabric blowing in the wind, scaffolding and bricks surround the still but distorted sculpture. The monumental figures embody the immobility of history and its memory, while the trappings of the present progress with their ethereal existence.

A transparent, digital reproduction of the eternal void in Harron’s monument floats above the city. Functioning as a warped looking glass as its bounces lazily across the screen, its glossy surface distorting two separate views of the city. 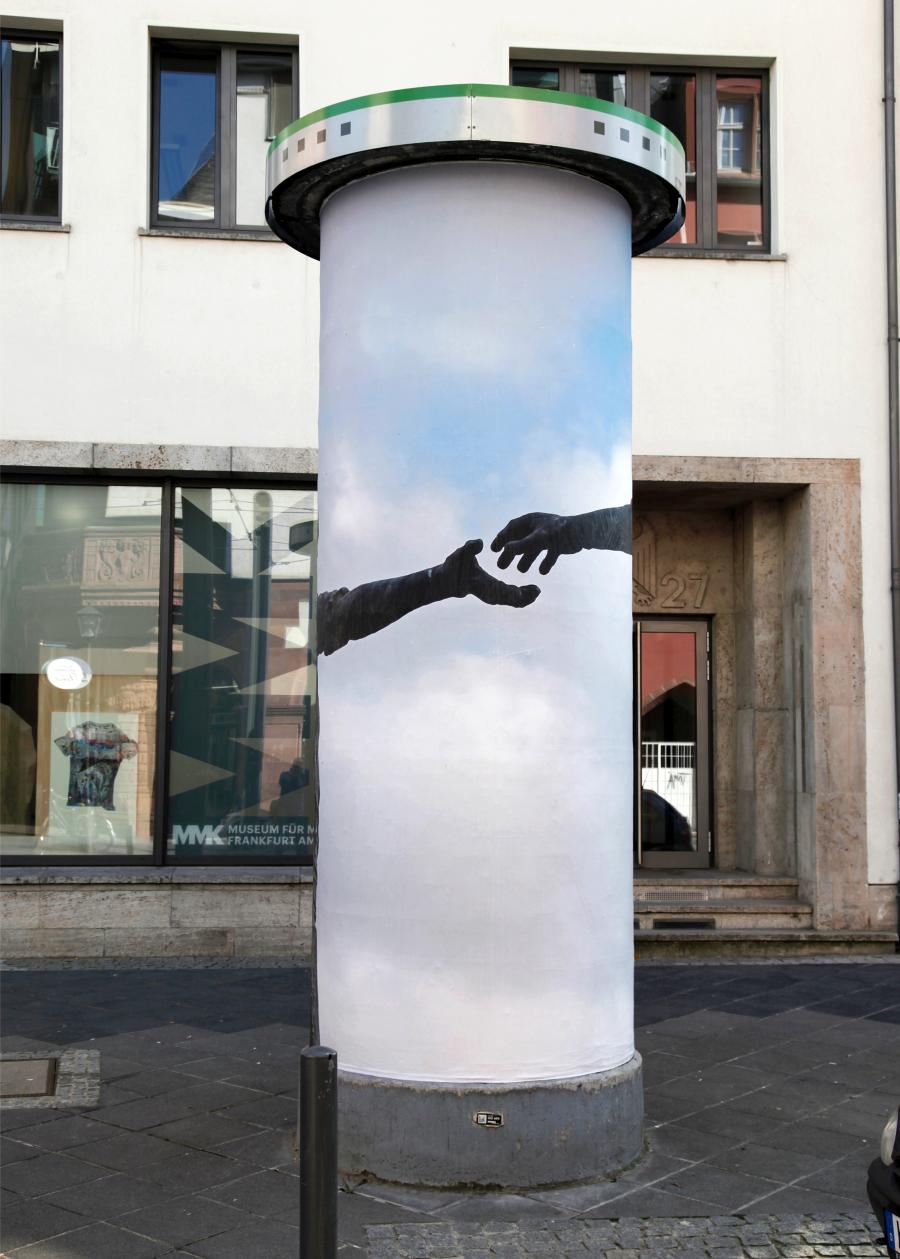 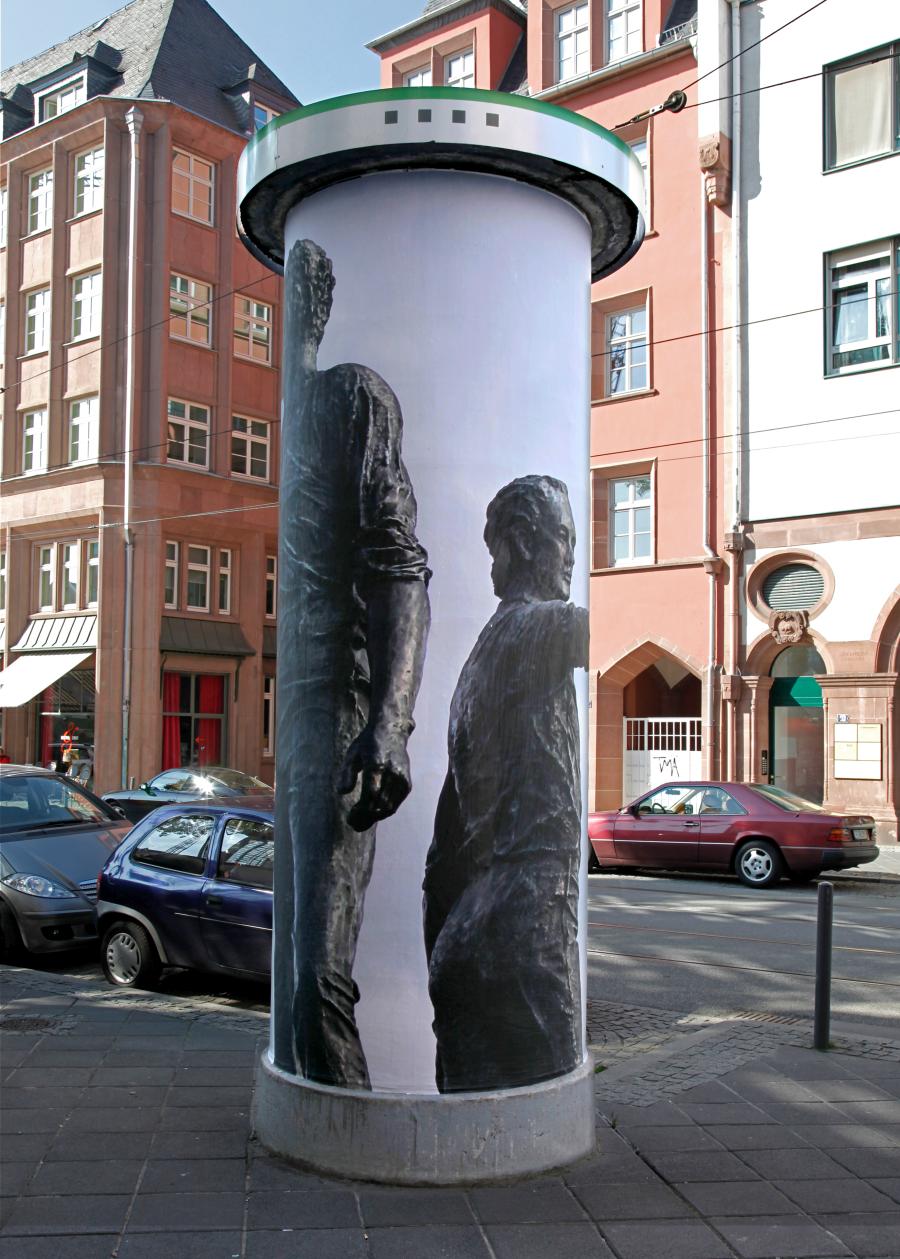 In Frenemy, the three dimensional monument has been turned into a two dimensional print within the format of an advertising column outside the Museum für Moderne Kunst in Frankfurt am Main. As displayed here, the division between two existing groups could be seen as an adaptive behavior; their hands eternally almost touching, yet their backs always turned to each other.

Back to Series Overview
All Selected Projects
By clicking “Accept All”, you agree to the storing of cookies on your device to enhance site navigation, and analyze site usage.
View our Privacy Policy for more information.
PreferencesAccept All