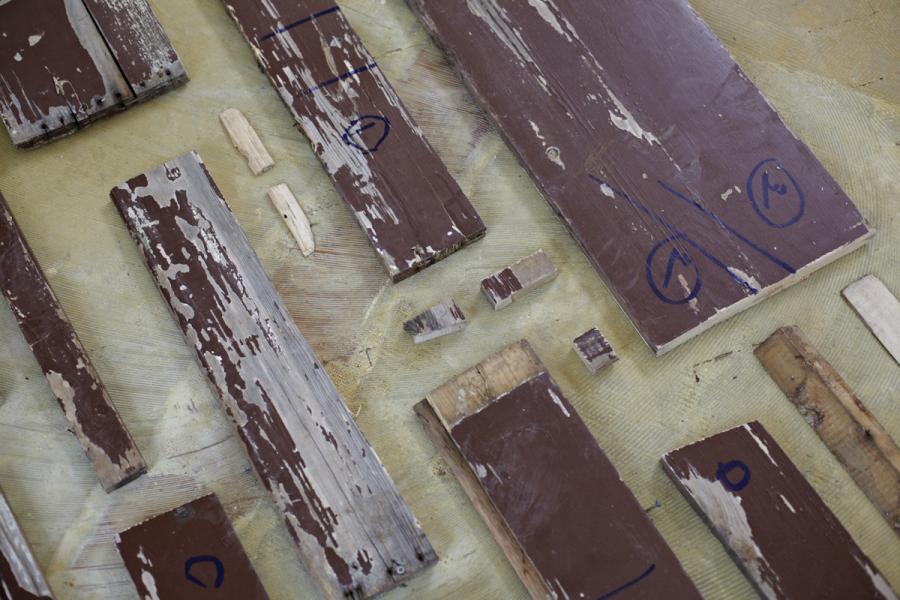 Detail of 'Regarding the Pain of Others' installation

Behind every Scar: A Story

Khaled Barakeh’s Regarding the Pain of Others and Damascus 15/02/2012 19:47:31, exhibited for the first time in Frankfurt in 2013, represent a sensitive and intelligent engagement with an ongoing violent conflict that is broadcast or live- streamed into our day-to-day reality through television and social media such as Facebook or Twitter. More specifically, both pieces mark the artist’s first two works that deal with the Syrian struggle for justice and freedom, in which Barakeh, who was born in Damascus and who currently lives in Frankfurt, has been involved from the very beginning.

In order to acquire, as he has said, a sort of critical distance, Barakeh had over the course of two years withdrawn from any artistic project or exhibition on this highly complex and above all personal subject. Now, as the trajectory of the Syrian Revolution and the subsequent civil war has become clearly visible, Barakeh has found a way to reflect upon both the experience and mediation of the upheavals in his country by bringing together his threefold perspective as artist, activist and human. His work reflects a life split between Syria and Germany, and in a broader sense between the Arab World and Europe.

What you would see if you were to enter one of the two exhibitions in Frankfurt, where Regarding the Pain of Others and Damascus have been shown during the course of this year, is a juxtaposition of two separate and at first glance rather different artworks. The first: a heavy, handcrafted sculpture or installation made of used wood lying on the ground. And the second: a digital print with a minimalist aesthetic hanging almost freely on the wall. While the installation, Regarding the Pain of Others, reveals amidst an array of different-sized wooden panels a massive chair that has been tilted backwards, the print on the wall, Damascus, does not seem to be of representational character. What it shows instead could be described as a black gestural abstraction on a pixelated light grey rectangle that is framed by a white background.

Thus, on a purely formalistic level, these two works bring together obvious contrasts like sculpture and picture, manual and digital, heavy and light, and maybe more importantly diametrically opposed artistic approaches, such as figuration and abstraction, craftsmanship and conceptual art. Yet, what both works share in common is the fact that they each confront the viewer with traces of an untold story.

For example, the print Damascus with its subtitle “Damascus 15/02/2012 19:47:31” forces Syria’s capital into view almost one year after the uprising against the regime. The picture we get, however, consists of a blurry grey background and black fuzzy lines, which do not bring to mind any familiar form or recognizable object. Hence, all attempts to understand the connection between what we see and what we are supposed to see are in vain. Yet, if we approach the work from all sides we will find that this inability of ours to look “behind” the picture is in fact reflected by the work itself. Between the print and the wall there is a slight distance, which allows us to see that literally behind the print the artist has installed five further layers of prints, the content of which eventually remains invisible to the observer.

The installation on the ground is more telling when it comes to the amount of traces it offers. No matter if you have or have not read Susan Sontag’s book, to which the title of Barakeh’s work refers, the few words “Regarding the Pain of Others” make it quite plain that what we encounter here will relate in one way or another to the representation of suffering and in particular – since the installation is facing Damascus 15/02/2012 19:47:31 – to the representation of the ongoing suffering in Syria.[1]

With this in mind the material of the installation, the red- varnished wood, is not only perceived as used material, but also as an object that was subject to some sort of violence. Thus, the chipped off varnish evokes the association of open wounds; and the cut-down pieces as well as the sawdust bring up images of dissection. Moreover the impression of violence is reinforced by the image of the tilted chair, which could be read either as a metaphor for disempowerment or as a symbol for powerlessness. And finally the arrangement of the wooden panels that surround the chair bring to mind the way weapons are arranged in preparation for warfare.

Interestingly, despite the strong and unsettling associations that are stirred up by Barakeh’s installation and that vividly bring to mind the implications of the revolution and the subsequent war in Syria, Regarding the Pain of Others also communicates some sort of silence or tranquillity. This sense might arise from the fact that along with traces of destruction we will find signs that could point to an attempt to bring back some sort of order, if not to say healing: The tilted chair is, for instance, not overthrown but laid on its back, where it rests calmly. Furthermore the surrounding wooden panels, which are worn down and broken, are arranged not in a state of chaos but in a geometrical order. And, last but not least, the sawdust – the obvious residue of a preceding act of violence – is carefully collected and compiled. Hence, what we see apart from scars is the possibility of recovery through transformation. But what exactly has been transformed? Or, put differently: where did the used wood come from and what was its former purpose?

Since the answers are not at hand the viewer or rather the act of viewing is, like in Damascus, again confronted with a barrier. Thus, in contrast to the representations of atrocities or wars that we encounter through the media on a daily basis, what is at stake here is not merely the visible, but rather what remains invisible, because it cannot be seen from an outsider position. And because it cannot be shown, it cannot be represented. In this sense Khaled Barakeh’s two impressive works could stand for what Judith Butler has described in her essay “Precarious Life” as “the impossible representation” or ‘the critical image’, which conveys the “unrepresentable” because it fails to do so and because it shows this failing: “There is something unrepresentable that we nevertheless seek to represent, and that paradox must be retained in the representation we give.”[2]

From here, from this paradox, questions arise, which in a way mark the end of art and the beginning of communication… or, in other words, the transition between art and life. For if you were to enter one of the two exhibitions in Frankfurt, where Regarding the Pain of Others and Damascus have been shown during the course of this year, you would find someone, a person – maybe even the artists himself – who, if asked, would be able to tell you that the wood in the installation Regarding the Pain of Others came from Syria, from Da’raa to be more precise, where it was used as a bier to carry those wounded or killed by the war – 135[AK1] times. And that it was brought to Frankfurt with the help of the Free Syrian Army, who attended and documented the bier’s journey out of Syria. Moreover this person could go on to explain that the print on the wall refers to a photograph, which was posted on Facebook on the 15th of February 2012 at 7.47 pm from Damascus and which showed the tortured back of a friend, who had been imprisoned by Assad’s forces. [2] And from here a conversation might start…