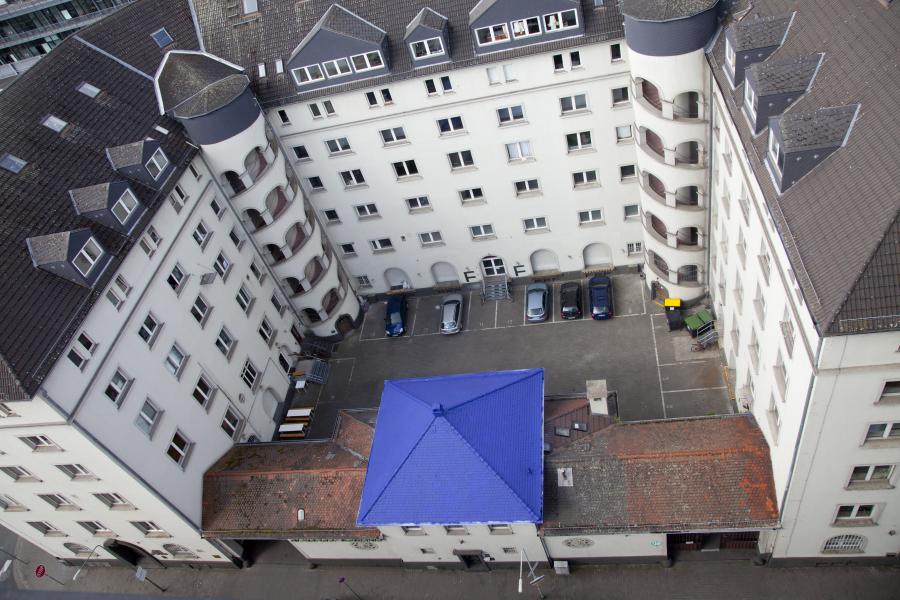 The world is blue

The world is blue.

Khaled Barakeh’s iKB was initiated within the concepts of home and housing, which are closely intertwined & carry strong personal and emotional connotations. Painting the roof of ATELIERFRANKFURT’s new quarters in the Ostend with a deep royal bluish colour – the starting point of Barakeh’s project – also echoes Yves Klein’s palette and the shade for which he soon became world famous and which he claimed a patent right for, calling the new colouring “International Klein Blue”. The idea of art historically referencing the French artist by reproducing his notorious blue colour already occurred to Barakeh while still living in Syria. In order to participate in the international art scene – a scene that is, due to local political developments, still virtually absent in Syria – covering the roof of his flat in Damascus all over with “International Klein Blue” seemed to be the most suited technique, because after having finished the paint job it would have been possible to spread screen images of the work by sending the exact coordinates via Google to every smartphone user around the globe. On a meta-level the artist’s interest was spurred by the fact that houses in Syria tend to be built in a very particular fashion reflecting the threefold world-structure, which is believed to consist of heaven (sky), earth (ground) and hell (underground). These houses always offer their inhabitants an open yard, in which a fountain can be found. This yard mediates between the divine sphere of heaven and all worldly matter in so far as the sky is reflected in the water of the fountain and by reproducing its vibrant blue colour connects the two surfaces.
‍

Painting the rooftop at ATELIERFRANKFURT apparently posed various difficulties primarily because of its exposed position. Firstly, the bricks had to be cleaned removing dirt that had coated these structures for decades as the building itself was already erected in 1912. The cleaning action was only to be accomplished by crane. So was the application of white primer that followed. “International Klein Blue” was applied shortly after and with the help of a colour bomb, which sprayed the colouring evenly onto the brick surface – a process, that is shown simultaneously on different TV-screens within the installation. Another frame of reference to Yves Klein’s practice becomes apparent here: colour bombs, or even flamethrowers, were frequently employed by the French painter within his studio context. Barakeh, however, experienced the process of roof painting as a personal catharsis and meditation. Having to focus on the spray paint and the bricks alone while on top of a crane post echoed a feeling of dissemination from the omnipresence of everyday technologies. Using these devices, first and foremost the artist’s iphone, which had become ever more important as a communication tool for him since the Syrian revolution started, was made impossible. This moment of meditative occupation has been transported acoustically into the exhibition space by means of an electric piano playing constantly only one note, creating a festive atmosphere that is reminiscent not only of Yves Klein’s monotone concert, but also an auratic environment as the piano tune sounds very similar to an organ.
‍

The light boxes positioned at the entrance of the exhibition cross-reference both the notion of home and its potential of shaping one’s personal identity, as well as the colour frame established by Yves Klein. Each of the five panels shows specific coordinates referring to Barakeh’s current flat in Bockenheim, the ATELIERFRANKFURT (on illuminated screen), the Städelschule and finally the artist’s place in Syria, thus creating a personal coordinate system, oscillating between virtual situatedness and technological abstraction, while visually incorporating Sigmund Freud’s theory of technology as mankind’s most helpful prosthesis.
‍

The eighteen TV screens, installed in a complex framework consisting mostly of grey wooden panels, embrace the performative character of the initial roof-painting as each of them projects a brick piece that loosened during the use of the colour bomb and was later collected by the artist – photographed, embellished with fragmented parts of a song lyric of great personal importance and digitalized, now forming a cryptic linguistic and historic puzzle. Barakeh’s emphasis in the arrangement of these pieces was fostered by written works of Georg Hegel, the 19th century German philosopher, primarily the idea of a dualistic structure governing all personal and impersonal historicity: the dialectic between the whole and its parts.
‍

Lastly, the third TV-installation – two bulky screens facing each other with but a few inches of distance between them, while only one shows an image reflected on its counterpart’s surface – refers to this personal aspect of technology usage. What would our smartphone ‘see’, given that it had a sort of reflective mind of its own, at the very moment we make use of it – wipe its surface, start the camera? By showing private video coverage Barakeh triggers these questions, whilst at the same time raising awareness of our total dependence on media technologies and the manifold means by which they shape and influence human behaviour.
‍

Thus iKB argues on different levels of interactive perceptiveness and attention, being itself virtuously situated at the intersection of architecture, urban and personal space as well as latest screen technologies, linking these frames through the medium of colour.